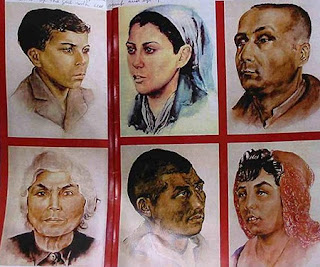 In doing further research into the case of Dina Babbitt, the artist who created the 7 watercolors of Rromani prisoners doomed to the gas chambers, I discovered a bizarre twist to the story. I'm sure others researchers have found this as well, but I was unaware of the attitude this case invoked in Holocaust deniers.
To give some background on the case, Dina Babbitt and her mother were prisoners at Auschwitz. When Mengele discovered she was an artist, he had her paint watercolors of 7 Rromani who were to be sent to the gas chambers. She kept them alive as long as she could, but when their portraits were finished, they were sent to their deaths. In 1973, Dina discovered the paintings still existed and she decided she wanted them back. Auschwitz refused, stating it would give precedent for other survivors to claim their property. A lawsuit began and in 2002 the Congress of the United States declared Dina Babbitt to be the rightful owners and implored the government of Poland to encourage Auschwitz-Birkenau to return the paintings. As of this writing, the paintings remain out of public view at Auschwitz-Birkenau. Dina Babbitt passed away in 2009 and her heirs continue her fight.
The paintings have had an awkward existence in Auschwitz. Many people believe the paintings should be kept at the museum in Jewish section, as the artist was Jewish. Others believe they should be kept in a "Gypsy" section of the museum, since that is the subject of the artwork and there is little surviving materials on the Rromani at Auschwitz.
Add the twist of the Holocaust deniers. They claim that the fact that Dina Babbitt wants her paintings back and Auschwitz's refusal is proof the Holocaust never happened. Their logic, flawed as usual, is still unsettling. They state that if the Holocaust did indeed happen, as Auschwitz claims, then Holocaust survivors should be respected and their wishes granted, since they are the witnesses to such an important event. Auschwitz's denial to hand over the paintings is proof, to them, that Auschwitz doesn't respect survivors, therefore it never happened.
Deniers also claim that Mengele would not have used paints to match a skin tone, he would have used photography. This aspect I can speak to. Mengele wanted the watercolors because he wanted their skin tones matched, something color photography may not have been able to do. A third generation photographer told me that back in the early 40's, certain colors were very difficult to capture. It is possible that Mengele didn't trust photography to get it right. Paints can be adjusted, but film colors couldn't. Sorry, skeptics, but Photoshop didn't exist back then.
This debate has been going on since 1973. A Holocaust survivor continued to be brutalized by Auschwitz long after the Nazis vacated the place. Auschwitz doesn't even have the paintings on display. Duplicates could be hung after the originals were returned to the family. It is high time they did the right thing after so many wrong things happened there and returned the paintings.
Posted by Ciuin at 6:25 AM